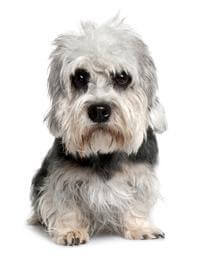 The Dandie Dinmont Terrier is an old Scottish breed whose origins began in the 18th Century. Originally owned by gypsies, these dogs were known as the Pepper and Mustard Terrier. For many years their popularity was limited to the border country between England and Scotland where they were much prized for their hardiness, hunting prowess and amiable disposition. It was only in the early 19th Century that the breed acquired greater popularity, along with its rather whimsical name.

Indeed, Dandie Dinmont was in fact the name of a character in Sir Walter Scott's 1814 novel Guy Mannering, whose pack of six Pepper and Mustard Terriers were described so vividly. Sir Walter was so taken with the breed that he acquired several of them during his lifetime. 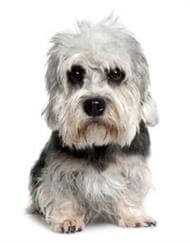 Average lifespan
Dandie Dinmonts will usually live to 12 years of age, but with plenty of loving attention and the correct nutrition will quite easily live up to 14 years.

Average size and weight
In peak condition these dogs should weigh 8kg for the female and be about 20cm tall, while the males are usually 11kg and 28cm in height.

Breed personality, characteristics & temperament
The Dandie, with its tasselled ears and large soulful eyes, is a very distinctive little dog. Described as the most placid, docile and gentle of all terriers, the Dandie Dinmont is prone neither to snapping nor yapping, and indeed has the bark of a much larger dog. This breed is more likely to reach up lightly for a pat than jump up and bowl you over.

Compatibility with other pets
The Dandie on the whole has an amiable disposition toward other dogs and is not prone to initiating conflict. However, if roused it can be a fearless opponent and an excellent guard dog.

Care requirements
The Dandie does not require extensive exercise as long as it has sufficient garden to play in and is taken for walks from time to time. While intelligent, it is not always the most obedient of dogs and will, if allowed, go about its business in a rather aloof manner. Its coat requires some trimming and grooming, primarily to remove loose and dead hair that can cause matting, but also to retain the distinctive Dandie features, such as the silky topknot and tassels. The Dandie Dinmont does not moult, so its body coat either needs to be stripped by hand or clipped approximately 2-3 times a year. Like all dogs, its toenails need trimming regularly.

Please take note
The Dandie is a hardy little dog, with few common ailments. However, due to having large eyes and a profuse topknot of hair, it can suffer some eye irritation if not regularly groomed and checked.

Ideal owners
A great little family companion, the Dandie Dinmont is exceptionally good with children, being very affectionate and gentle.
Click herefor advice on adopting a rescue dog and finding a breeder. All information has been provided by the Kennel Club.
Copyright © Mars 2020 PEDIGREE®, Trademark of Mars Incorporated and its affiliates
An Affiliate of Mars, Incorporated