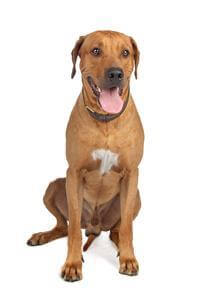 Centuries ago, when the first white people arrived in South Africa, they found that the Hottentots at the Cape were using dogs of the Ridgeback type for hunting purposes. The peculiar ridge of hair, running parallel to the spine and in reverse to the rest of the coat, at once distinguished it from other breeds. During the 19th Century big game hunting flourished in Southern Africa, particularly in the area north of the Limpopo River, later to become known as Rhodesia (after its founder Cecil John Rhodes).

Hunters were quick to realise the value and importance of good hunting dogs. In choosing dogs to fill this role, it was natural that they turned to a native breed - the Ridgeback - a dog that had, for generations, proved such a boon to the African Hottentot with his primitive weapons of the chase. The origin of the breed is not definitely known, but the most generally accepted view seems to be that it is the result of crossing the Cuban Bloodhound with the Hottentot hunting dog, the latter supplying the characteristic ridge.

From such a breeding one would expect just such characteristics as the Ridgeback so markedly shows - speed, power, courage, fidelity, and in addition, a remarkable skill in tackling wild animals. Unfortunately for the breed, the name Lion Dog became popular because several big game hunters found them by far the best for lion hunting, and this led many to assume that the dogs were the actual killers of lions, although no dog would have stood a chance in a fight with a lion. Ridgebacks would harass the lion by constant feint attacks until it was held in sheer bewilderment, giving the hunter a shot at close range. With the advent of long range rifles, hunters dispensed with the use of dogs so the Ridgeback has had to turn to its other vocation, that of guard dog. 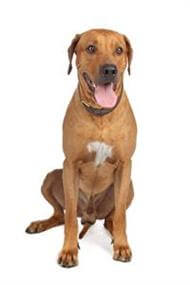 Average lifespan
Rhodesian Ridgebacks live from between 10 to 12 years of age.

Breed personality, characteristics & temperament
The Rhodesian Ridgeback has a delightful nature, being a faithful one-man or family dog. It is very affectionate and likes to lean on you, lie at your feet or sit on your lap if permitted. It is extremely loyal to those it loves. Although not an aggressive dog, the Ridgeback is distinctly reserved with strangers and usually objects to people making the first advances to it. It is placid and easy going, putting up with endless torment from children, as well as being highly intelligent and quick to learn. Happy to participate fully in family activities, the Ridgeback is equally content to laze around all day if there is nothing better to do. An excellent guard dog, it has a deep bark to warn intruders to keep away. Friendship, once given, is for life.

Compatibility with other pets
It is compatible with other domestic animals, but needs training regarding livestock.

Care requirements
This is a fast growing dog that should not be overfed or over exercised as a puppy, as this puts too much stress on developing bones.

Please take note
Remember that this breed is part of the hound fraternity and likes to chase. Secure fencing and gates are needed.

Ideal owners
No single breed of dog ideally suits everyone and there are aspects of the Ridgeback character that may not appeal to some people. The Ridgeback is independent and stubborn and if you give it an order when it would prefer to be doing something else you will probably not get instant results. Servility plays no part in the temperament of this breed, but if you want the rewarding companionship of a dog that has spirit and considers itself your equal rather than your slave, you need look no further. The Ridgeback is extremely tolerant of children, however is not so well suited to older folk, who may have trouble handling a boisterous puppy.

Click herefor advice on adopting a rescue dog and finding a breeder. All information has been provided by the Kennel Club.
Copyright © Mars 2020 PEDIGREE®, Trademark of Mars Incorporated and its affiliates
An Affiliate of Mars, Incorporated